You can HEAR Captain Voss’ complete audiobook on Audible for

Audible gives you your first audiobook free. You can buy the book on audible, amazon, and other audiobook. Please use the links above because it goes a long way to helping Oxriver Publishing produce more 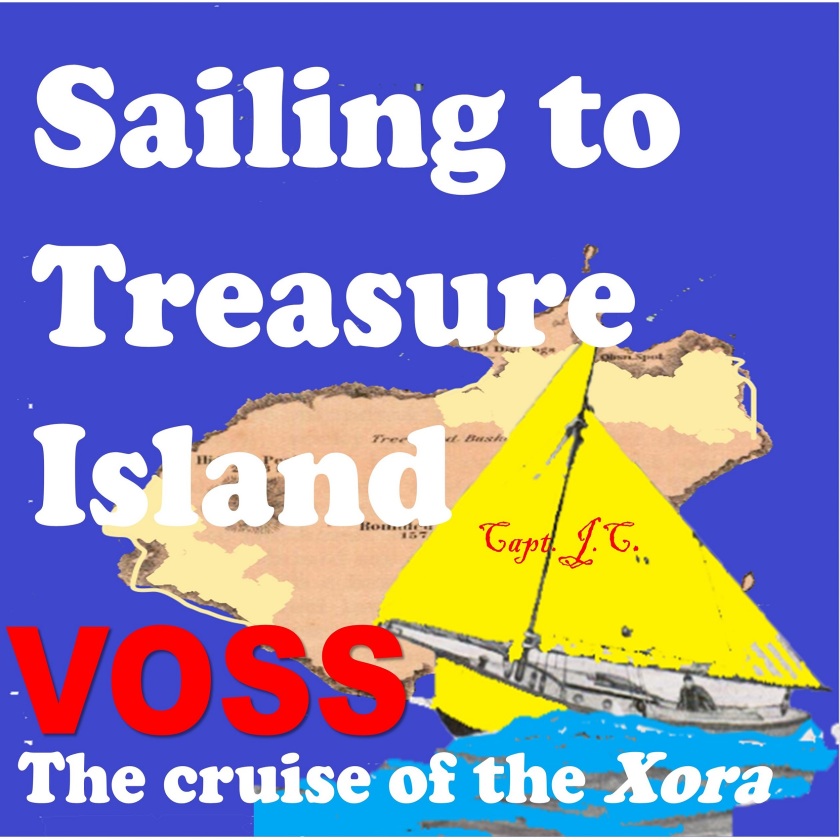 For a limited time a pledge of at least one dollar at Patreon will get SAILING TO TREASURE ISLAND: The Cruise of the XORA (Annotated) by Capt. J. C. Voss and How to Sail Around the World Part-Time audiobooks.

Below is a description of SAILING TO TREASURE ISLAND: The Cruise of the XORA (Annotated)

Legendary sailor Captain J. C. Voss meets a mysterious man in his hotel in Victoria, British Columbia in 1897. The mystery man says he knows where tons of gold and jewels are buried on the remote Cocos Island. Voss takes a 35-foot sailing sloop seven thousand miles through gales in search of the pirate Treasure of Lima worth seven million pounds sterling in 1897 or over $200 million today. *This is an edited, abridged, and annotated version of the first section of the Venturesome Voyages of Captain Voss concerning the voyage of the XORA sloop. This is the only part of that work focused on treasure hunting.*In the 2018 edition, the text is extensively edited as the first edition from 1913 had many run-on sentences and poor subject and verb agreement.*A biography of the great mariner Captain J.C. Voss is written by the editor.*Frequent footnotes and an editor’s note put the text in historic context.*This is an abridged version of the VENTURESOME VOYAGES OF CAPTAIN VOSS. This abridged version focuses exclusively on the cruise of the sailboat XORA and treasure hunting aboard it. Most of the VENTURESOME VOYAGES OF CAPTAIN VOSS is about the voyage of the sailing canoe named TILIKUM.Below are some selections from the book:”My seafaring life commenced in the year 1877, when I was quite a young man. Up to the time that I sailed in the Xora, it was spent in large sailing vessels. During this period, I have filled all sorts of positions from deck boy up to master.Throughout all those years, I would certainly not have believed that a vessel so small as the Xora could live through a heavy gale at sea. Naturally enough, I should not have thought of attempting a long sea voyage in any small craft if it not been for a gentleman, whose name was George Haffner, an American citizen.In the summer of 1897, when I was sitting comfortably in an easy chair in the Queen’s Hotel, Victoria, British Columbia, a gentleman stepped up to me, saying, “Are you Captain Voss?” I replied in the affirmative. He then introduced himself as Mr. Haffner, handing me at the same time a letter, saying that it was from an old friend of mine, whose death had taken place at sea just fourteen days previously, and with whom he had stayed during his last moments.””…The bearer of this note is Mr. George Haffner, who knows the position where the great treasure lies on Cocos Island. Believe in him, and he will make you a rich man. Excuse my short note, because I am very weak. Kindly remember me to all my old friends and believe me.Your dying friend, JIM DEMPSTER”Captain Voss is one of the early pioneers of long-distance sailboat cruising. He is the first major author in the genre of the sailing narrative write about his travels under sail after Captain Joshua Slocum. He is more famous for his 40,000-mile voyage in a sailing canoe named TILIKUM, but this treasure hunting adventure under sail is a book that will delight all readers.Oxriver Publishing produces titles of interest to sailboat cruising enthusiasts. This is an annotated and modernized version of Captain Voss’ classic account in the VENTURESOME VOYAGES OF CAPTAIN VOSS, which includes an editor’s note and biography of John C. Voss by Dr. Linus Wilson. The editor is the creator of the Slow Boat Sailing YouTube Channel and Podcast as well as the author of several sailing books.